The Ceylon Chamber of Commerce (CCC), releasing its economic outlook for 2017 yesterday, warned that the private sector could face growth challenges in a sluggish economic landscape peppered with drought, tricky external conditions and key internal structural reforms but was optimistic of an uptick in some exports.

The Chamber in its new report titled ‘Economic Review and Outlook 2017: Triumph through Turbulence’, which contains information on trends, risks and prospects of both Sri Lankan and the global economy, noted that tighter fiscal and monetary conditions as well as the impact of drought would be a test for the business community.

The European Investment Bank will provide € 50 million to support improvement and expansion of sewage networks across Colombo.

The new loan will help the Colombo Municipal Council achieve its goal of providing full sanitation coverage to benefit people living and working in the greater Colombo area. The new EIB loan is the European Investment Bank’s first support for water investment in Sri Lanka and the first loan for public sector investment agreed with the new post-civil war government.

Reuters - The rupee ended lower on Friday on dollar demand from importers, but the Central Bank’s moral suasion continued to prevent further decline, even days after the monetary authority signalled a change in its intervention policy.

“Today one-month and two-week forwards traded actively, but we don’t see one-week forwards after yesterday’s moral suasion forced reversal of deals below 150.40,” said a currency dealer who declined to be named.

Officials from the Central Bank were not available for comment. 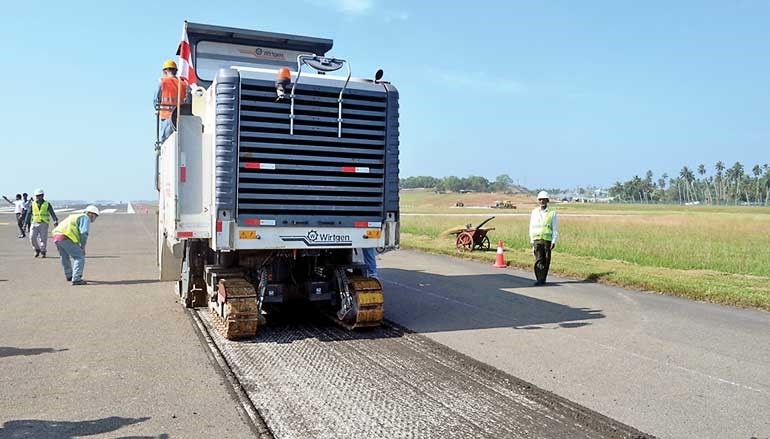 Text and Pix by P. Kumarasiri Prasad, our airport

The Airport and Aviation Services (Sri Lanka) Ltd yesterday began work on the revamp of the runway at the Bandaranaike International Airport with an investment of $41 million.

Transport and Civil Aviation Minister Nimal Siripala de Silva was the Chief Guest at the ceremonial launch of the work which will span three months. To accommodate work on the revamp, the BIA is partially closed from 8.30 a.m. to 4.30 p.m. daily until 4 April. As a result, around 1,000 flights will not be operated with airlines making alternate arrangements.

Ceylon Chamber of Commerce yesterday in a bold and welcome statement called on the business community to support Central Bank's independence and policy reform efforts.

It said the Monetary Policy Roadmap 2017 released by the Central Bank of Sri Lanka (CBSL) this week provides an encouraging outlook for the Sri Lankan business community. The Ceylon Chamber of Commerce is encouraged by the future plans of the CBSL with regards to monetary policy, price stability, financial system stability and institutional reforms.

The Roadmap 2017 announced a shift in monetary policy making, towards a flexible inflation-targeting framework away from the current money supply targeting framework. This will be a progressive and ambitious shift, but would need to be implemented over time.

A special discussion on the strategic approach to the national program of eradicating poverty from Sri Lanka was held at the Presidential Secretariat under the patronage of President Maithripala Sirisena on Thursday.

The Government aims to achieve the global sustainable development goals and build a poverty-free Sri Lanka by 2030. Many programs are scheduled to be implemented next year to eradicate poverty.

He also pointed out that digitalisation would help middle income countries like Sri Lanka to lay a firm foundation to improve efficiency in the public service by developing human resources and ensuring transparency in State administrations. It will also help end the age-old practice of making illegal economic gains in the sector.