The approval follows the IMF Executive Board completing the first review of Sri Lanka's program. The latest release brings the total disbursements under the EFF arrangement to $ 325.1 million. The first tranche was released in June this year.

"Sri Lanka's performance under the Fund-supported program has been broadly satisfactory despite challenging circumstances," IMF's Acting Chair and Deputy Managing Director Tao Zhang said, following the Executive Board's discussion of the review. "Macroeconomic and financial conditions have begun to stabilise, inflation has trended down, and the balance of payments has improved. Meanwhile, international reserves remain below comfortable levels," he added."Fiscal performance has been encouraging. The reinstatement of the amendments to the value-added tax will help boost revenue. The 2017 Budget proposal aims to strengthen Government finances through revenue mobilization, while guarding against revenue shortfalls by aligning spending with revenue on a quarterly basis. The new Inland Revenue Act scheduled for early next year should result in a more efficient, transparent and broad-based tax system. Complementary structural reforms in tax administration, public financial management and the governance and oversight of state-owned enterprises are critical for durable fiscal consolidation."

"The banking sector is currently well capitalised. Steps are being taken to find a resolution mechanism for distressed financial institutions. Going forward, there is a need to strengthen the supervisory and regulatory framework and identify and mitigate vulnerabilities in the financial sector, particularly with regard to non-banks and state-owned banks." IMF confidence on SL growing: Ravi K 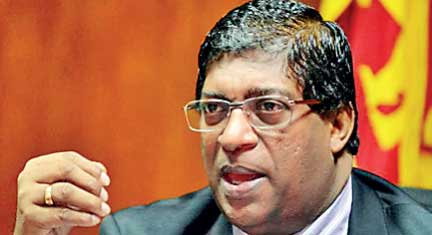 "Having expressed further confidence in Sri Lanka, for moving its economy in the right direction, the IMF has approved the second tranche of the proposed loan to Sri Lanka for 2016," Minister Karunanayake said.

The total loan expected to be granted to Sri Lanka by the IMF is $ 1,500 m, and will be released within three years.

$ 325.2 m was allocated for the year 2016 for Sri Lanka, and the first tranche for $ 162.6 was released last June. The IMF Executive Director Board has approved the balance tranche of $ 162.6 when they met at the IMF headquarters in Washington on Friday.